I've written some articles over the last six months criticizing the conduct of several dozen webcomics colleagues. Loosely summarized, the charges are cheating, lying, deception, snobbish behavior and indifference to the well-being of other cartoonists. A few qualify for other charges, like bullying, or thuggishness.
My articles are within the grasp of everyone who can write a webcomic, though I don't promise they don't take work. A lot of research went into them, and they are not typical blog posts.
I dedicate some time to discussion of the articles, but the same problems keep repeating: people want to comment without having done the reading, and some people who have been incriminated want to make the debate personal. Creating a spectacle is a common method of distracting the public from things people want hidden, so I don't participate.
While I understand we all have strengths and weaknesses in our skills and education, those who are confused are going to have to remain so, or find their own help. You see, the more time we spend talking around the issue, the less time we spend verifying or overturning my findings. For someone who disputes my findings, the best thing is to write your own article.
Webcartoonists who act with professionalism far outnumber the juvenile delinquents. In fact, there are over 9000 of us for HalfPixel, Dumbrella, their hangers on, and some with other affiliations. We also have far more readers, collectively, than they do, and far more mature readers.
So here we all are, working on our comics, with hundreds of role models for professional behavior, and maybe thousands, and we have allowed years of podium hogging by a tiny percentage of people who tend to have to lie and cheat about their accomplishments to keep us cowed and inflate their egos.
The conclusion of my research to date: these people are phonies, not to be believed; they care only for themselves and regard you as their worshippers. Their reputations appear generously inflated.
So, though it's a bit embarrassing to be deceived by people like HalfPixel -- who in documented accomplishment are very close to nothing, and whose real accomplishments are neutralized by atrocious behavior -- it's also a relief to know that we can kick their asses up over their heads, and they are the ones who should be concerned about acceptance.
If you haven't been caught being naughty, you are a professional webcomicker. Income doesn't matter: dedication and conduct are far more important. The tens of thousands of creators and readers who take comics seriously and put their field ahead of their own gravy train are the real leaders, and can begin displacing the self-appointed kings and celebrities immediately.
Congratulations. They have embarrassed us and cost us public respect on many occasions, but it's all been a game of nerves and bluffing. Now the power is in your hands.
Desiring instant action? You can express your opinion of the choice of Scott Kurtz to represent webcomics at the Harvey Awards this year. I let them know about the conduct I have seen and experienced from Kurtz, and said that he is probably the last person on earth I would pick to speak for my trade. Write: baltimorecomiccon@yahoo.com
For those of you who have met Scott, and found him charming, even "nice," remember, that's the front. He is exceptionally good at it, and I've talked to mature, seasoned adults who find it amazing. Until you've seen him change in a flash to the spoiled tyrant who thinks he is your king, you're just watching an act. 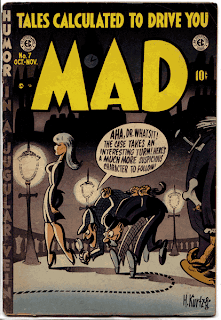 One of Kurtzman's famous early
MAD Magazine covers
Harvey Kurtzman (1924 - 1993) was a huge inspiration for everyone from Robert Crumb to, well, me. The Harveys are named for him, and he deserves better than Kurtz, as do we. Our letters may or may not undo the invitation, but they'll guarantee one thing: the Harvey people will do some Googling next year.
Again: baltimorecomiccon@yahoo.com