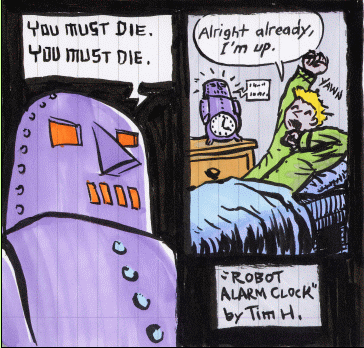 Today's illustration is from Chemical Comics Daily
Rubifruit, the banner exchange for female comics people, has a new address: exchange.rubifruit.com. Looking over the site, I saw some unfamiliar comics titles, and I can't help wondering if the site is a bit Balkanized. This sometimes happens with collectives (which Rubifruit is not), and all I can say is, be careful not to limit your contacts to your favorite sites. When I look at a site and 20% of the titles are unfamiliar, it means somebody needs to get out more (and I'm not saying who)... LilChat is another entry in my ongoing parade of unique sequential art themes: the sequence is that of IM chats, and the characters are the avatars. So is The Hypothetical Comic, which has some fine moments for a concept comic...

"Finnish Comics Dissected" is the best failed blog I've ever read. Too bad it's only four paragraphs. Maybe if we all submit comments they will sober up and post another entry.... I've been testing a lot of SEO tools offered as attention-getters by web site consultants, setting them against each other and against Google Analytics. Bottom line: a lot of them don't work. An example: GA reports and displays 1423 links to one of my comics. The Domain Stats Tool at webconfs.com musters 28, of which 20 are unique. I'm seeing this again and again: a calm willingness to present faulty information as accurate by people who should know better. Be especially wary of services which offer "spying" tools or brag about special algorithms for doing phrase counts, and yet produce the same results day after day, even if you modify the target word's frequency on your site...

OpenZine connects my future to my past. Before webcomics -- before the public web even -- I put it down on paper and went to Kinko's, then the post office. Now you can turn your blog into a zine with this site. Like blogs and zines and, *ahem,* comics, a lot are only somewhat interesting, but then you find a spellbinder: Atomik Bomb  is the work of people who paint graffiti murals on trains and other inappropriate things, and the glimpse into their subculture is fascinating and intriguing. It's still not art and it's still a crime, but the motivations and hierarchies of those rendering these human slime trails  are surprisingly complex and need to be understood if they are going to incarcerated, with the cell key smelted into an ingot and hurled from the space station. If anyone uses OpenZine on their blog-based comic, I'd like to hear about it.

Matt Forsythe of Drawn and Ojingogo posted a link to this on Twitter, and the art is so riveting I want to pass it on. Thirty Ways to Die of Electrocution is an interesting contrast to those cards you get in your airplane seat pocket: we've changed safety art from detailed and memorable to simple and forgettable. You can follow Matt Forsythe on Twitter and brush up on tarsiers and other fascinations... You can read my comics and make conclusions about my sense of humor, or here's a clue: the comic featured atop this post is incredibly funny to me. I can stare, mesmerized, for five minutes, savoring it. The fact that it is drawn on loose leaf paper makes it richer: I imagine a high school kid with a boring teacher cranking out a world class gag while nervously shielding his page from observers. That kid was me once, and I've always appreciated comics that leak out of classrooms like samizdat .
P.S. If anyone is interested, Webcomic Overlook has published an interview with Pug and me. If you like it, a lot of the credit goes to Larry for composing engaging questions. We thank him for the attention, and recommend you discover his blog if you don't know it. It speaks for itself.