An Interview with KEZ 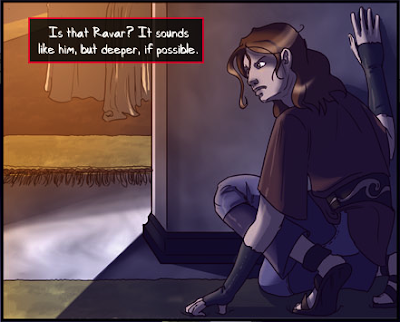 From "War of Winds"
© KEZ
KEZ is a webcartoonist, site designer and a great advisor on many segments of webcomic construction and business where I personally could stand some teaching. After several interesting conversations online, I asked if she would participate in an interview.

If you're like me, you'll find she answers questions you didn't even know you had. She did her thesis on webcomics, both the translation of her own novel into a graphic medium and the business dynamics of webcomics. She's also the creator of War of Winds webcomic, and, well... much more. She's got a lot of ideas about finding more revenue for webcomics. Read on...


Q: Many people have seen you around the web, but for the rest, what are your projects and responsibilities?

A: First and most importantly, I am currently in charge of updating and maintaining the Xylia Tales sites. As a senior member at the SpiderForest comic collective, I help get new members settled, build/design/update webpages for members there, keep order, and do the work our admin need not be bothered doing. Recently, I’ve also stepped forward to design and update the SpiderForest front page, which was coded by the SF admin, Ran Jado. Most recently, I helped organize and update the Palace in the Sky  site, founded by a friend and business associate of mine. Together, with about forty other members, we strive to increase visits to all member sites through group-wide Project Wonderful ads that fund advertising to the Palace in the Sky gateway sites.
Q: You caught my attention when you said that WordPress/ComicPress is a great comics platform because it is built for optimization and making money. Please explain.
A: Wordpress is set up to be naturally efficient and do the work FOR the user. Through the use of PHP includes, site updates are site-wide, with the least possible work. For example, straight HTML sites must update every single page if a change is required; CSS/PHP sites require modification of only a few files that control the look of the entire site. One might look to Earthsong as a prime example of this difference. Despite being one of the most popular fantasy comics currently available, Lady Yates has built her site using only HTML, and while she spent considerable time updating the front page look, she declined to update the rest of the site because she’d have to edit every file. This is only the first level of optimization, from the perspective of a webmaster.
CP integrated into WP also allows for two simultaneously updating features: the comic AND the blog. Webcomickers often find themselves having to choose whether to drawl on beneath the comic to increase search engine referrals, or creating a more “seamless” read by saying nothing (ex, Alien Dice vs. Gunnerkrigg Court). The importance of readable text on a page becomes apparent when one joins an ad network, which is discussed in length later. More than I would like to see, webcomickers say NOTHING AT ALL beneath the comic because they consider it self-important, arrogant, overly-wanting-of-attention, boring or not important all. CP offers the compromise of a necessary, updated news area, while still allowing “author’s notes” if so desired, without interrupting the reader.

From the webcomic maker’s perspective, ComicPress is a great platform also because there is little work involved. There is an upload feature for comic files with the comicpress manager plug-in, so no FTP program needs to be involved (unlike ComicGenesis). Pages and blog posts can also be added through an online interface, circumventing the need for any HTML editing software. Automatic templates are available for archiving also. For example, one may choose by a listing of comic page titles or thumbnails of individual comic pages.

How this relates to making money involves how ad companies and readers/potential buyers approach a site. There are basically two ways to make money with a webcomic: sell merchandise, or sell ad space. For the former, CP/WP looks professional, if not horridly original. No one buys merchandise on an unprofessional-looking site, and a fully-optimized CP site makes people take you seriously (again, for the least amount of work). Through the use of the sidebars and blog area, you can always display your merchandise, and update it whenever you get something new. You get MAXIMUM exposure of what you are selling, even though the main purpose of your site is not a store. Merchandise however, is NOT the main, most-popular, or most-successful way to make money with webcomics. The smart way for most to do it is to put ads on your site. In the same way that you can maximize your merchandise exposures, you can do so with your ad space. I say “for most” because a truly successful business should rely on selling merchandise primarily, and ad space secondarily. At this point, I don’t think it is possible to survive on a comic selling only ad space.

So from the businessperson’s perspective, CP is great because WP is optimized for space, visibility and SEO (Search Engine Optimization.)
Q: Please explain what search engine optimization ComicPress provides for comics.
A: The most lucrative sites, regardless of content, get the majority of their visitors from search engine queries, NOT direct referrals from other sites. In the webcomic world, this is the opposite; our biggest referrers are other comics. Usually, the culprit in this instance is simply the medium. Comics are a visual medium, which can’t be searched with words. Search engines work by finding text on a site similar to the search query. If there is no text to search, how can anyone find your comic unless they stumble across it from another comic?
CP encourages the webcomic creator to post text with each comic, and at the same time, has an extra blog feature for posts not so associated with the comic. Each post is searchable, increasing the likelihood of getting more search queries, but neither of these features are used enough by the non-professional webcomic creator. CP/WP also allows automatic “perma-links.” Perma-links are the long URL strings you see in your address bar on properly optimized WP sites. Page titles are searchable! For example, if I used CP, I might name a page: “War-of-Winds-epic-fantasy-webcomic-page-17-talon-is-kidnapped.” How many times a day are the phrases “Epic Fantasy,” “Fantasy Webcomic,” and [unfortunately] “kidnapped” searched for? Lots! And for me, these are search queries I am likely to get, and are not so popular that my site would get lost in the sheer number of other sites likely to use these keywords.

WP/CP also uses keyword “tags” with every post, yet another feature far more people should be taking advantage of. When you make a long giant post there, you can end with keywords that apply to that post. Again, these are searchable.
So, basically, CP naturally encourages you to do all the things people paid in SEO are trained to do.
Q: Lots of comic WordPress sites look alike, and it gets tiring. What blocks people from upgrading the look of their ComicPress so that it looks original?
A: The biggest problem confronting new users is a lack of CSS/PHP know-how. Modifying the CP theme has gotten much easier since the initial version, but it still requires quite a lot of coding knowledge for the average webcomicker. Most webcomic sites out there are built with standard HTML 4.0 or XHTML, with tables and columns and easy-to-read tags. CP, on the other hand, is pure CSS, with PHP included in separate files, with complicated PHP commands to display posts and comics. It is very much UNLIKE anything the amateur coder or webcomicker is accustomed to, and the confusion quickly becomes intimidating.

Another example: when a webcomicker who has built his or her own site at, for example, ComicGenesis tries to move over to CP, the immediate response is most often, “WTF? Where are my bleeping ***tags***?” Compared to what most webcomic creators have “grown up with,” CP seems incredibly advanced. The good news is, once you’re past the initial intimidation, CP can be greatly modified, and rather easily. All it requires is fiddling around in the stylesheet, and knowing which of the many theme files applies where.

Q: Where is the best source of ComicPress support?

A: Most definitely the ComicPress site and help forum. The site is constantly updated with new tutorials and plug-ins to make CP easier to use. One thing that is important to remember is that this is ONLY version 2.5. CP is still new, and still improving. Each version so far has been better and easier than the last, and everyone is recognizing the need to get more information about HOW to modify themes out there.
Recently there was a technical guide to using CP posted that is great for someone starting out.

Q: How can people work around that challenge?

A: There are a lot of people out there willing to help those new to CP learn how to use it correctly. The support forum linked above is a great place to go if you have a specific question, because most likely, it’s already been asked (and answered) before. I’ve seen multiple posts on The Web Comic List asking for help with CP, and all were answered quite quickly. Other than paying someone who is experienced with CP to modify the site for you, the only avenue left (and also the one I would recommend first) is to learn basic CSS. If you only know HTML, CSS will complement everything you do.
Q: Some say CSS has a pretty steep learning curve. Do you agree? How did you learn? Feel free to recommend tutorials.

A: Yes and no. Learning to read and manipulate pre-existing CSS is very simple. Learning to code CSS is much harder, at least for me it is. I recommend the first site that comes up when you plug “CSS tutorial” into google: http://www.w3schools.com/css/. It has a built-in editor, where you can test your CSS in live action.

Lastly, a What-You-See-Is-What-You-Get (WYSIWYG) editor such as Dreamweaver will be loads of help. The CS3 edition is amazing.
I also highly recommend dissecting the source code and style sheets on sites already active. That was how I learned it, and I used the above tutorial site to clarify any confusion I had on the variables involved.

For FireFox users, I also recommend the Firebug add-on, which will help you discover quirks in your code if you don’t know what’s wrong. It’s a very awesome add-on, and will save you many *headdesks*.

Q: Can you show us where you have intentionally worked SEO words into a discussion to attract advertisers? I am interested to see how slick you have to be, to sense how much skill is required."


A: It involves real SEO skill to make articles correctly, and I lack that skill. Ideally, you'd have a list of "middle-popular" search queries that you would insert into your article. Finding those search queries takes study. Context-based advertisers pick those queries up and send more ads your way.
Here is a post where I talked shortly about High School Musical 3: After doing so, my fill rate for ads in the "movie" category increased greatly.
Here is one about Heroes. Here is one about a music application called "Pandora".
This was by far my post successful post, about Hellboy II and Batman: The Dark Knight. My fill rates jumped to 40% from a normal 20-25%, which was really nice. On every post, I at least try to mention something movie or book related. I get large fill rates for the "books and literature" categories.

The conclusion of this interview appears tomorrow. Comments are open.