Shotgun Interview #3: Liesl Adams of On the Edge 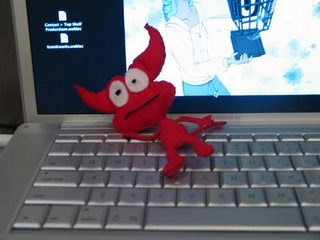 Mr. Negative plush toy prototype.
An interview with Liesl Adams of the web comic On the Edge:
Q: What web comic (not by a friend) do you think deserves wider attention, and why?

A: I've been enjoying Croaker's Gorge by Steve Ogden. Really nice style, and I like the premise. It looks like a newspaper comic and I like that.

Q: Is there a web comic you are always excited to read, the minute it updates?

A: There aren't too many that I'm on pins and needles about (I spend too much time online as it is), but I keep up with Bayou, and Paradigm Shift, which are both great stories.

Q: What web comic by someone you know would you recommend?

A: Pigtails and Potbellies by Mike White. Another strip that looks like it should be in a newspaper somewhere.

Q: What blogs do you read?

A: I visit Flooby Nooby and Cartoon Brew quite often. Lately I've been trying to learn a bit more about the comics industry so I've been reading The Beat and Comics Worth Reading.

Q: Introduce your work to new readers in a few sentences.

A: On The Edge is a quirky comic about a police officer and her roommate, who is a Demon forced to do good by working as a therapist. It's also my answer to the question of what might happen if Alice grew up in Wonderland.

Q: What are your web sites, and what do they offer?

A: On The Edge can be found at ontheedgecomics.com. I also have a sketchblog, where I post sketches, news, and sometimes other comic strips I come up with. My illustration portfolio can be found at leisladams.com.

Q: What promotional tools have helped you find new readers?

A: I think joining web comic directories has helped, as well as advertising on Project Wonderful.

A: I can't pick the best thing. Someone told me that my comic was their get away from stress. Someone else said that my comic was one of the first web comics they ever read. People have been really encouraging, and I appreciate it!

Q: What's the worst thing about the state of web comics today?

A: I think in a lot of ways web comics are still considered a new thing, so it still has trouble getting respect as a medium, especially from the print industry. The print world and the web comic world are still a bit separated. It could be because there are just so many web comics of varying quality out there, but I think the bar is constantly being raised, so it's getting better.

Q: What tip would you offer someone launching their first web comic?

A: Make a LOT of comics before you start putting them online. Because life will happen. And when it does you won't have to go on hiatus.

Q: What merchandise item would you love to offer if the economics allow?

A: I would love to have plushies available.

A: I just used Skype for the first time to talk to a friend in Ontario, we had web-cams and everything, and it was awesome! I'm still marveling at how wonderful modern technology is.