A teacher once lectured our class about a "rule of three." If something was mentioned or invoked three times in a story, it meant it had significance later.

When I wrote the recent post about the relationships between making fake followers on Twitter, having weird traffic patterns in your public analytics, and embarrassing our craft I tripped over myself trying to emphasize that Twitter fakery was a symptom, not the disease. I said it in so many ways, so many times, that I may have triggered the rule of three, causing inattentive readers to think the story was focused on Twitter fakery.

Then I made it worse, by saying Twitter fakery does have some importance, in that it reflects poorly on character and is part of a growing trend toward celebrity inflation as a means toward success, as opposed to quality of work and self-discipline.

This has created a splendid opportunity to mock the whole article by painting me as a hysteric who can't handle a little fun on silly old Twitter. You can make your own conclusions on that one. Start with Jeff Rowland's episode . (At least one cartoonist has the guts to take on the issue with his pen, and he isn't even named in my story. It may not be his best work, and I confess I'm a little confused, but hallelujah, at least one guy is willing to mix his feelings into the art and publish it. I drink a lime water in your honor. (Meanwhile, I'm getting cryptic gum ball wrapper emails from (a few) anonymous angry people, and they aren't even worth displaying here. That's embarrassing.)

I'm satisfied with my article, for the most part. But I am not satisfied with the trajectory we are on. The complexity of analyzing and describing why something is bad can leave us tired, confused and irritable.

Everything I care about can be captured in a few sentences:

I think webcomics need to move away from shallow celebrity and conventions, and toward deeper story and art. Regardless of what award has been won, 99% of webcomics published today will not withstand the judgment of history. We're not doing good enough work, and we have to do better if we want to leave a legacy.

We must represent a profession, not fake professionalism.

Making mediocre creators into "players" by holding down standards cheats everyone. Helping people of all skills enjoy and understand comic-making benefits all.

It's time for our Star Search wannabes to grow up.

It's time to reclaim your own artistic vision, dump personality cliques and stop being so frightened that someone is going to eat your pie. If you're so lonely and isolated that you carry dead weight colleagues for company, you're not only in the wrong business, you're on the wrong kind of web site.

If Mr. Natural was here, he'd kick a lot of people sky high. We have to do better. We can all do better, or most, and the slackers better stop cheapening the coin for everyone else. 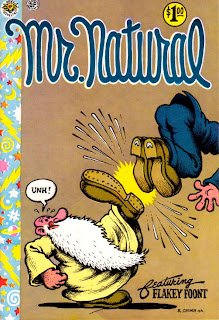 __________________
*Title borrowed from a comment by fluffy, who is one of the best critic/friends/cartoonists anyone could hope to have. Mr. Natural created and drawn by RCrumb. Next: I think something nice, if all works out. At least, with 40% less kicking. Now go draw something that even Mr. Natural would love.