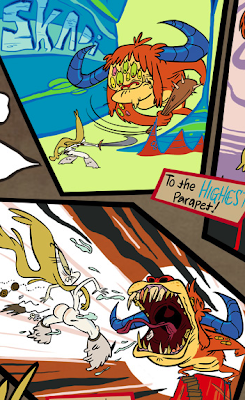 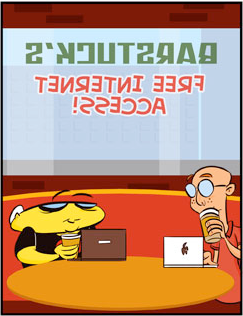 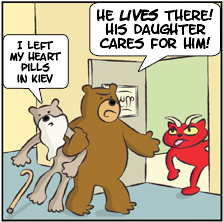 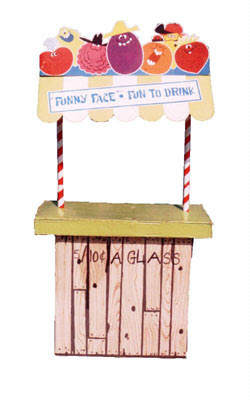 Top: In fairness, I chopped it horribly, but though the hyperkinetic action of Katie Rice's "Skadi" is breathtaking it sometimes makes me dizzy. Then I turn to the measured pace of a "round" comic like "PC Weenies" by Krishna Sadasivam (below). Middle: The Katzenjammer Kids are wonderfully roly-poly and cartoony for a newspaper comic. Next: A wonderfully cartoony frame from Li'l Nyet, the comic I do with Pug. She's got the magic touch. Next: Joe Kloepfer's "Ripeville" carries on the classic style of comic fruit. Compare it with the 1969 Funny Face drink stand at bottom. (Funny Face was a Kool-Aid-like powdered fruit drink, and probably vanished before Joe was born.)
When discussing comics, these are two words that could stand more use: comicky and cartoony.

Here is how I define them.

rubbery
springy limbs
more like animation cells
more 3D
characters can often morph to some degree
limbs bend in curves
In cartoons, draw inspiration from early cartoons like "Steamboat Willie" and later, Bullwinkle; in comic books, from Casper and Uncle Scrooge; in newspaper strips, from Katzenjammer Kids (and many others)

more like drawings
flatter
less overall motion
look like newspaper cartoons and most comic books
characters don't morph much (major exceptions: mouth, tongue and eyes)
stiffer
limbs bend in angles
Draws inspiration from cartoons like Dexter's Laboratory and various awful super hero cartoons; from comics, the super hero style pioneered by Marvel; and from newspaper strips -- well, most of the modern ones, with exceptions like Nancy.


Cartoony comics are far outnumbered by comicky comics. This might be because cartoony styling is less fashionable, but I think it may be because cartoony is harder to draw. Without skill and precision, small deficiencies in line lose the 3D effect, and the art reverts from cartoony to comicky.

Watercolors confuse the issue, but also reveal it. In watercolor, it's not the design of the line art that conveys motion and 3D, though it does contribute. The major role is played by variations in the depth of color, which are an alternate way of creating a 3D effect.

Comicky styles have served us well. Just consider the popularity of Peanuts, or Dilbert, one of the least 3D comics ever. The latter looks like he was pressed by a steam roller, with his tie adhering to a wad of gum on the drum.

There's a bit of advice frequently given to aspiring writers: show, don't tell. To me, cartoony comics tends to do a better job of showing the story because the characters are more dynamic.

Cartoony comics have some baggage. There are not many people avid about characters like Casper the Friendly Ghost, or other denizens of Charlton, Gold Key, or Harvey.

Vintage cartoony styles have to a degree been displaced by newfangled cartoony, much of which traces to animator John Kricfalusi of "Ren and Stimpy." The contortions of the characters are often, to my eye, over-frequent and over-exaggerated. They're hyper-animated. They can give the comic or cartoon a frenzied element that I find disruptive, but there are plenty of well-balanced works that show the style at its best.

When I first saw "Dexter's Laboratory," I was struck by how it seemed to be a retreat from animation to drawing. Then DeeDee flitted into the scene, and I saw that a contrast was being offered. In the end, the tight scripts make the best episodes appealing, showing that minimalist animation can be good.

Dexter is an animation example of the growing use of a heavy black surround line, making characters "pop" more but reducing their roundness. Cardoons is an example of a heavy black surround webcomic, as is Chloroville, another fruit and vegetable cast. I prefer the meanderings of a brush line to the paper doll look of surrounds with a constant thickness outline, but that's me. Part of my bias may come from seeing years of banal Garfield comics, which made the look a daily phenomenon.

I like cartoony comics, and occasionally have to strain the definition to include some in the category, usually by referencing a resemblance to Sunday newspaper spreads of yesteryear.

I would like to see more cartoony comics on the web. The problem is, they are more work. For Pug and me, making our comics the way we do is a labor of love, and they'd probably be even cartoonier if there were more hours in the day.

Here are some titles that trend cartoony. Keep in mind that cartoony has different elements in newspaper comics, comic books and animation. If you are a student of cartooning you might enjoy looking at these titles and making your own analysis.

And here are a couple in the newfangled, post-Ren & Stimpy style: