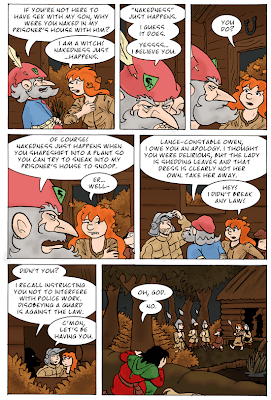 Rogues of Clwyd-Rahn, by Reinder Dijkhuis;
Backgrounds by Calvin Bexfield; color flats by DFG
Reinder Dijkhuis is a giant in his home country of the Netherlands, and well known around the world of comics. After placing an ad on his epic comic, Rogues of Clwyd-Rahn, I became interested in the strip. Soon I was wondering if I could persuade Reinder to be the first European cartoonist to be interviewed on this site, and he responded graciously. By luck of timing, he is in the process of moving to the United States, where his enthusiasm seems sure to draw new readers.

Q: What web comic (not by a friend) do you think deserves wider attention, and why?

A: That's a tricky one as I am a big community whore and often end up befriending creators whose work I like. But one comic that springs to mind is Holy Cow! Christian Comics, which is the only Christian religious comic I consider worth reading. Dean Rankine's art is not
pretty but it's very lively and his updates on well-known Bible stories and his musings on why he believes the things he does are funny and touching. The comics are also very short, which makes them easy to consume as kind of a "thought of the day" meditation.

Q: Is there a web comic you are always excited to read, the minute it updates?

A: Most webcomics update while I'm asleep or at work, but I'm always happy to see The Ten Doctors update.

Q: What web comic by someone you know would you recommend?

Q: What blogs do you read?

A: Where do I start? My favorites are Lawyers, Guns and Money, Pharyngula and Crooked Timber as well Daniel Davies' blog D-Squared Digest . I've cut down a lot onmy blog-reading though, because they're such a time sink. For art-related blogs, I skim Drawn, Boing Boing
and Photoshop Disasters.

Q: Where do you get your comics news?

A: Through the grapevine.

Q: Introduce your work to new readers in a few sentences.

A: Rogues of Clwyd-Rhan is a humorous fantasy-with-real-world-roots series in a style influenced by traditional European comics. It was about a gang of incompetent bandits, but it's now about a group of farm owners whoused to be a gang of incompetent bandits. There's a bit of magic and the supernatural in there, but the emphasis is on the characters and
their relationships.

Q: Your strip has been in your life for at least seventeen years. What kind of traveling companion has it been?

A: A very demanding one at times. My drive and compulsion to create the comic has always been on and off, but when it was at its height in the early 1990s and then again in the early 2000s, I gave up a lot to have time to do it. These days, I take things a little easier. The journey
is close to its end anyway - there are only a few more stories to be told. 2011 would be a good year to wind it all up as the comic would be 20 years old by then.

A: In my life: moving to the United States. That's going to take a lot of effort and energy and I could use a little magic to smooth over the process. If you told me that two years ago, I'd have thought you were nuts for even suggesting such a thing.

Q: Artistically, my dream is to go back to making music, which I used to do a lot. My plan for that, if I won the lottery, would be to start over with that. Learn to play the guitar again from scratch, learn music theory, develop my ear, form a band.

A: As far as comics are concerned, I can't answer your question because I'm re-evaluating what I'm doing it for and what I get out of it. In five years time, I'll probably be doing something very different from ROCR, but I have no real idea what it would be.

Q: What are your web sites, and what do they offer?

A: Rogues of Clwyd-Rhan at http://rocr.net or http://reinderdijkhuis.com is my main website, offering most of my comics output over the past 20 years, plus my blog. The Chronicles of the Witch Queen at http://www.webcomicsnation.com/reinder is a collaborative site featuring work by me, Geir Strøm, and Daniel Østvold set in a shared universe. Some of those works overlap.

Q: What web sites have proven especially helpful to your comic's development?

A: DeviantArt, I guess, and the many other webcomics I've read over the years. When it comes to reference or tutorials, though, I'm much more likely to use a book, visit a museum, do life drawing or just get a direct explanation of how to do something from someone I know.

Q: What promotional tools have helped you find new readers?

A: Project Wonderful, The Belfry and word of mouth.

A: One of my fans became my girlfriend, so I don't think you want to hear
the answer to this one.

Q: What's the worst thing about the state of web comics today?

A: The fact that for the vast majority of them, there's little to no money. But that's true of all the arts, always.

Q: What tip would you offer someone launching their first web comic?

A: Relax. Don't listen to people who demand regular updates, even if their reasons sound convincing. Just make sure that what you've got is good, that it improves, and that it stays fun for you.

Q: What merchandise item would you love to offer if the economics allow?

A: I'm already offering my favourite type off merchandise, which is original art. About 200 originals are now for sale. Some high-quality books would be nice to have though. The kind that John Allison puts out - they're lovely.

Q: Where are you, geographically?

A: Aggie! Falling in love with a lovely artist and comics creator in America has been a big change for me.

Q: Would you tell a talented newcomer to build their own web site, or use a comics hosting site?

A: A newcomer should use a hosting site first, if only to figure out what they want. Don't spend time on anything other than the comic itself until you know you're going to go through with it and that the flexibility and control that a hosting site offers are worth the time you will spend on them.

Q: Do you think Photoshop and Illustrator are giving web comics a particular look, and is that a bad thing?

A: Let's not blame the tools here. The reason why so many webcomics have cookie cutter styles is that their artist starts out with little in the way of cultural baggage and just imitates the stuff they like, which is often the popular stuff. I do think that's a bad thing, but the talented ones usually grow out of it. It is, however, the reason that I often prefer the work of older creators from the print world, such as Donna Barr, who came into webcomics late in their careers, over
that of younger artists who have just got started. People like Donna have long got the lack-of-baggage issue out of the way, if they even had it to start with.

Q: What is motivating all these people who are bringing new comics to the web every day?

A: Damned if I know. It probably seems like a good idea to them at the time. That's how it worked for me.

Q: Are you a fan of any web comics that are not drawn, but rather composed entirely with software, photos, props and the like?

A: No, though I do read some comics made in 3D software. I think the best photocomics were things like the Dutch comic Mannetje & Mannetje, which I read as a teenager, in print. I don't think there's anything on the web that can compete with that, and it wasn't even nearly the
best that that comic's authors did together.

Q: Which do we need more: more good artists, or more good writers?

A: That's like making me choose between eating and drinking. If you put a gun to my head, I'd say writers, but comics need both.

Q: Are you in a comics collective?

A: Yes, I'm a member of Square One, which is still being formed.
__________________
Editor: And the lingering question of who's Aggie? See American Gothic Daily and the guest artist for the last few months on ROCR.